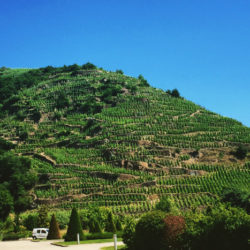 Part of the curriculum during my study abroad is that, in addition to classes, we tour local companies to learn more about different industries. Today we visited Vidal-Fleury, a winery in the Rhone-Alpes.

We arrived to a magnificent view. I had never been to a winery before, and it was so much more beautiful than I had imagined it to be. The weather was absolutely amazing as well, perfect for the millions of pictures I planned on taking. 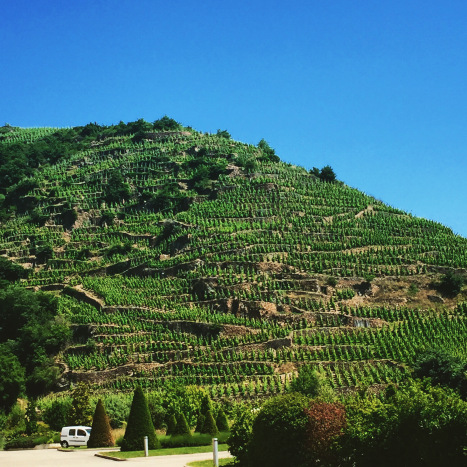 We were able to go into the winery, and our tour guide was very informative, which I was very pleased about, as at past company visits it was at times hard to understand the guide. I learned some very interesting things about the wine industry in France, and the differences when compared to the United States.

For starters, Vidal-Fleury exports 70% of the wine it makes. It ships to countries like the United States, Japan, China, and most countries north of France. Our tour guide did mention that they did not ship to Spain or Italy, as they were hard markets to enter because those countries have lots of competition.

The processes are also much different. For instance, transportation laws are more complex. In the United States companies are able to drive grapes across country without a problem, but in France the transportation laws are more rigid. Thus, in order to acquire wine from the south of France it needs to be contained a more specialized way in order to follow the law. Another point our guide made was in reference to labels. The winery doesn’t put labels on until they have orders in, as there are parts of the label that have to be different. In addition to the language differences, there are markings on French bottles that reference taxes, as well as importers names on bottles exported. Because Vidal-Fleury doesn’t want to have to make multiple labels in case the undersell to a market, they wait for this process to take place.

We then went into the cellar to check out the next steps of the process. We were able to see the barrels that the wine are kept in. There were stains on the barrels, which is from the wine that is spilled over when it is being poured in. 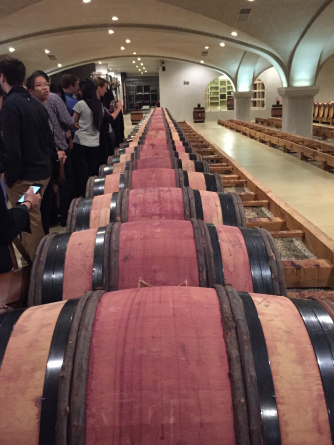 Every eight months a worker at the winery will take a sample and taste it, and decide which of the barrels need to be combined, as a portion of the wine is absorbed into the barrel’s wood, making the quantity of wine less. It is important for the winery to not just generically split up the first few barrels into the others, but to ensure that the quality of taste is even across all the barrels.

Interestingly, the aging process depends heavily on where the grapes originated from. The ones from the south have much bigger barrels, as they need to have oxygen added to them over time. This is in contrast to the smaller barrels in the photo above, which contain wine from northern regions of France. 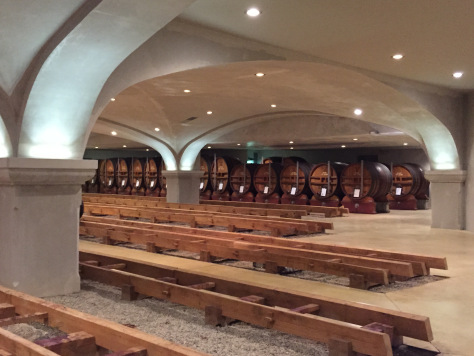 How the grapes are harvested also depends on the location. The ones in the Rhone Valley are harvested by hand, and while some smaller wineries will still crush the grapes with their feet, bigger ones like Vidal-Fleury no longer do.

We then moved on to the bottling room. The bottling process is important, because as soon as the wine is separated from the skin of the grapes the wine needs to be bottled quickly, as it is the skin is what protects the wine. The picture below is of the bottling machine, which was very interesting to see. It looked as though it was a suction cup to grab the bottles, and then it flipped them onto a conveyer belt where they were brought to another machine upstairs. 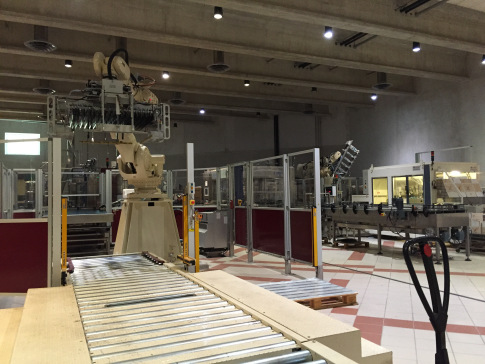 After our tour we were allowed to look around other parts of the winery, and then were given a few samples of some of their better wines, ranging in all types of tastes. It was exciting as I have never had any experience like this prior, let alone in a country that is one of the largest wine producers in the world. The company visit was very enjoyable, I felt like I learned a lot, and now I’m even more excited for our future visits! 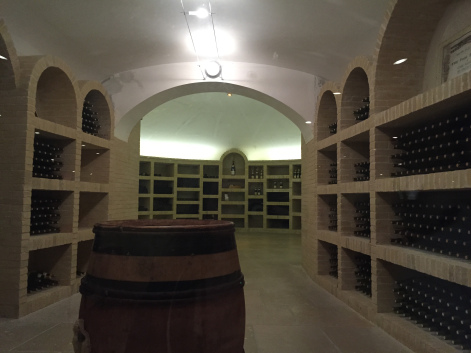