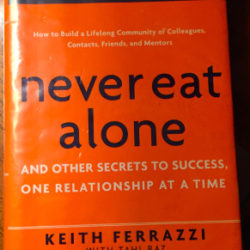 Even with my job at Victoria’s Secret as a sales specialist, I have a lot of free time. And me being me, I need to do something to fill it. While at first I sat down and binged watched some TV shows, reveling in my freedom, after about a week I realized that too bored me, and that I needed to stop with the Netflix and devote time to actually learning something. My go to method for education is books, so I hightailed it to the library with a list of top business books and left ready to learn.

The first one I decided to read was “Never Eat Alone” by Keith Ferrazzi with Tahl Raz, a nonfiction book on networking, relationship building, and how business (and furthermore success) is dependent on those bonds. I’m interested in the idea of networking, thanks in part to everyone preaching the importance of LinkedIn, but also because it seemed a bit strange that who you know is equally, if not more, important than what you know. I figured reading an entire book on the subject would help me have a greater understanding of the concept. It also helped that the book’s design is memorable, with its bright orange cover, making it the most interesting looking in the bunch. 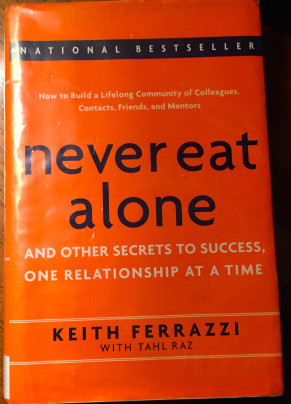 Overall I thought the book was very absorbing, one of the better business books I have read. It was interesting, Ferrazzi’s writing style is conversational, so it’s easy to get through fast, and he keeps the book relevant. The format of the book also helps with the readability, as the book is organized nicely. Ferrazzi has many chapters, with chapters containing lists throughout to help break down information easily. Having these lists allows for the reader to digest the information much easier than if it were presented strictly in long essay format.

Something small that I also enjoyed was that under some (but not all) of the chapter titles, there was a quote related to the chapter (such as the chapter “Do Your Homework” featuring the quote “Spectacular achievement is always preceded by spectacular preparation.” – Robert H. Schuller). Even more however, I liked the use of historical examples.

It’s no secret I’m a fan of history (check out how I discovered my interest in history, or my favorite events and people in history for more history love!), so having pages dedicated to relating business topics back to people in history hooked me. Ferrazzi picks entertaining and relevant examples as well. My two favorite he used were describing Bill Clinton and Eleanor Roosevelt. When talking about Clinton, he had previously discussed having a mission, a goal in mind, and referenced Clinton in college, and how he remembered everyone’s names. Clinton knew that if he were to run for office having a large network of people around him was crucial, so every time he was introduced to someone he would add them to his address book on the spot, and write down a few facts, knowing it would become important later. Similarly, Ferrazzi talks about Roosevelt by highlighting the important steps she took in history, even when it was contradictory to what her connections believed. Ferrazzi emphasized how Roosevelt went against the grain when concerning her views on civil rights, publicly admonishing people in her social circle (The Daughters of Liberty) in order to advance her opinions. Ferrazzi used Roosevelt to show that while connections are important, they shouldn’t hold you back from achieving your own goals.

When concerning the general content of the book, I was pleased. I felt as though I walked away understanding, for starters, how much more complex networking is as a whole, and some strategies to go about increasing my own interactions with other people within the business world. My personal favorite chapter was “Build Your Brand” (and only slightly less the subsequent chapter “Broadcast Your Brand”), in part because I have an interest in personal branding and how brands like Nike become so popular, and also because I felt it was the most relevant chapter to me. While I enjoyed the majority of the book, at times I felt like it would have been more useful if I was immersed in the working world, rather than just starting out. Right now I do not believe I have the connections or the influence to carry out half of the suggestions Ferrazzi gave, although within five years time I will be in a position to start implementing some of his recommendations. Yet the chapters on branding invigorate me, and make me excited to see what I can do. While I might not be able to do everything Ferrazzi speaks about yet, taking some tips from “Build Your Brand” such as having “the pursuit of WOW in everything you do” inspires me to start figuring out what I want my own personal brand to be.

My final favorite about “Never Eat Alone” was how honest Ferrazzi was about his own failures. He frequently mentions the importance of vulnerability, and how letting others see you as a human being (which includes your faults) can actually help instead of hinder you. What Ferrazzi does next I was surprised by: he dedicates an entire chapter, “Never Give in to Hubris,” to detailing a time where he messed up. Badly. Without spoiling a section of the book, Ferrazzi essentially became too full of himself and ended up with his foot in his mouth. And while it might seem counterintuitive to highlight a time where you as the author failed, I believe that it in fact gives Ferrazzi more validity. He is able to provide evidence that certain approaches don’t work, thus giving his advice more credibility, and making him as a person more relatable, as we as the reader can relate to a time we embarrassed ourselves.

In whole, I very much enjoyed “Never Eat Alone.” It didn’t take me too long to read thanks to the informal writing style, I felt as though I gained knowledge along the way, and there is apparently a new book by Ferrazzi, “Who’s Got Your Back,” that I could read in the future. But no book is perfect, and “Never Eat Alone” is no exception.

One quote particularly stuck out to me, one that I disagree with. Ferrazzi states that you should “never ask for more pay until after you’ve been doing the job successfully and become invaluable.” While at first I nodded along with it, on further inspection I would have to say I disagree. I am a strong believer that it can be worth it to take a lower paying job in order to later reap benefits, such as gaining more industry knowledge, meeting people that will later help you, or guiding you down a more preferable path. But while that’s all well and good, sometimes you have to stand up for yourself and your wants. If you are doing well in your job, and you truly believe that you are deserving of a raise, more benefits, etc., then I believe you should ask. The worst that can happen is that you get turned down. Even if that is the case, you will be seen as someone willing to deal with an uncomfortable conversation to ask what they want, a quality people want to see, and a quality people will respect you for. If you are completely unqualified, it is an entirely different story, but sometimes waiting until you are 110% qualified makes you lose out on opportunities because you waited too long to ask for what you wanted.

The only other issue I had with the book was that, at times, it felt as though it was self-promotion. But, to an extent, that’s what a book centered on your successes is. I did enjoy hearing how Ferrazzi went from “the son of a small-town steelworker and a cleaning lady” to the businessman he is today. Yet I felt as though there were times when his history had gaps. Ferrazzi jumped too quickly for my liking from being a poor boy with no connections to being CMO of Deloitte Consulting. Although the beginning of the book spends time detailing Ferrazzi’s backstory, I would have enjoyed more information about the beginning stages of Ferrazzi’s networking, especially being a 19 year old college student myself. Being in what can only be defined as the first stage of my career, I think reading about how Ferrazzi used his network to advance himself when he was a small fish in a big pond would have been able to help me more in the present.

“Never Eat Alone” was an enjoyable and informational book. For people just starting out in their careers I would hesitate to recommend this book first, but for individuals who are currently working and looking for a way to improve their careers, Ferrazzi’s book is 100% worth the read.

For More On “Never Eat Alone” and Keith Ferrazzi