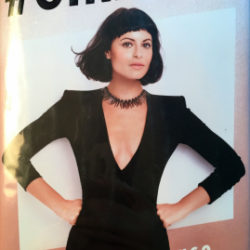 For the second book in my quest to learn something over the summer, I turned to Sophia Amoruso, founder of Nasty Gal, with her book “#GIRLBOSS.” #GIRLBOSS is part biography, part instruction manual on how to be a #GIRLBOSS, which, as Amoruso describes it, “is someone who’s in charge of her own life. She gets what she wants because she works for it…You’re a fighter – you know when to throw punches and when to roll with them…You ask questions…You’re going to take over the world, and change it in the process. You’re a badass.”

Amoruso made me want to read her book to find out what I could do to become a #GIRLBOSS, because being one sounds phenomenal. To me it means being in control of my dreams and passions, while also being prepared to deal with the reality that is that not everyone is going  to be as excited for me as I am. It means getting what I want, not by having it handed to me, or by luck, but because I worked my ass off to get it. Being a #GIRLBOSS means that you are cool, confident, and collected, and always ready to deal with what life throws at you. I’m glad Amoruso’s book was my next pick because it helped inspire me to find the #GIRLBOSS within me. 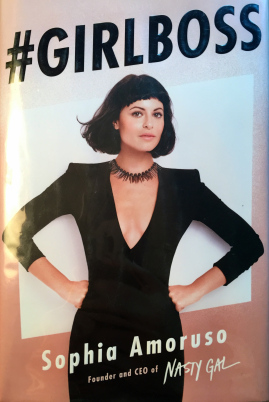 I liked #GIRLBOSS from the first paragraph, thanks in part to the tone of the book. Amoruso gives a chronology of her life, with the first entry reading: “1984: I’m born in SanDiego on Good Friday, which was also 4/20. Before you think this is some kind of omen, let me assure you that the only thing I smoke is my competition.” Right from the start Amoruso establishes herself as funny, while at the same time strong. This style of writing, mixing humor, opinions, and straight up empowerment does not fade at any point during the book.

Having an interest in history, I tend to enjoy an asborbing biography. So when Sophia Amoruso was describing her rise to the top, I was hooked. She details her history very honestly, and very vividly. Starting with a hernia in her groin which forced her to get a desk job for the health insurance, Amoruso talks openly about her days of dumpster diving and stealing, the early phases of creating her business on eBay, and takes the reader through the expansion and hardships of creating Nasty Gal, showing us how there is more than just one way to achieve your goals, even when you are doing anything but what’s conventional.

Even when detailing her life’s adventures, Amoruso is still able to drop in pearls of wisdom for the reader on what they can do to make their own life easier, and to empower them on the way. My favorite piece of advice came from when Amoruso was describing when she was at her first trade show, trying got get brands to work with Nasty Gal. She says that she was initially rejected when she was talking to brands she was interested in, but instead of taking the no and retreating, she ignored the dismissal and showed that stubbornness can pay off and she continued to highlight Nasty Gal until people listened. Unsurprisingly she was able to form more connections when she used this approach, as the people she was selling Nasty Gal to were increasingly interested the more she kept describing it. Amoruso proves that hard work and dedication are recipes for success, along with many other interesting pieces of advice throughout the book.

#GIRLBOSS is also very creative, based on the design of the book alone, not even taking into account the interesting writing style. Amoruso maintains this creating by including a multitude of visuals in her book. When referencing different points in her life, or in her company’s history, she usually had an accompanying photo to give more life to what she is describing. Even the format of the book is interesting, with each new chapter having a picture showing what the upcoming chapter is going to be about, and the other side having the chapter title and a quote, with quotes ranging from Abraham Lincoln and Pablo Picasso to Wreck It Ralph and the “For Dummies” series. Even though these are seemingly insignificant, I believe it is the little things that give a book that something extra special to set it apart. 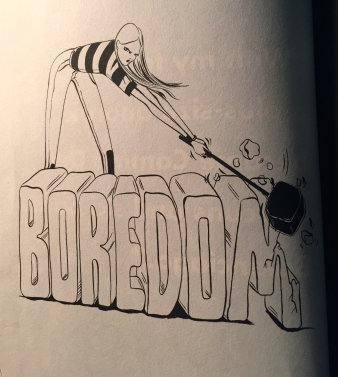 The last major part of #GIRLBOSS I enjoyed were the sections of the book titled “Portrait of a #GIRLBOSS” which spent two to three pages highlighting a woman that Amoruso deemed worthy of the title #GIRLBOSS. I personally did not know any of the women featured, but I liked how Amoruso was able to show how different people got to where they were, and yet highlight how being a #GIRLBOSS is something similar in successful women across the board. After reading about connections and networking in “Never Eat Alone” just last week I also thought it was a great way to promote others that Amoruso respects and considers fierce, something that makes me in turn respect Amoruso more. While Ferrazzi in “Never Eat Alone” did highlight examples from history that were relevant to his points, Amoruso is able to show that there are people in today’s time that are doing amazing things, instead of focusing on larger than life characters of the past.

#GIRLBOSS was a killer book in my opinion. I thought it was well written, entertaining, and taught me life lessons without making me feel like I was learning at the time. Because of this, I believe that #GIRLBOSS is a good read for anyone, regardless of gender. But it’s clearly marketed for women, shown by the title alone. It could very well be that it’s primarily for women based on who Amoruso is: she built Nasty Gal, a fashion retailer, an industry that men are stereotypically not as interested in. But just because Amoruso is involved in fashion doesn’t mean that her book is any less relevant to men. Unfortunately, due to the way the book is presented, I doubt as many men will read it as women, although the advice Amoruso gives is fantastic across the board.

The only other thing I wasn’t 100% in love with in #GIRLBOSS was due to a lack of research on my part. I was expecting less memoir and more life advice, and instead got the opposite. While there was advice thrown in on saving money, such as how a #GIRLBOSS “should save 10 percent at the bare minimum,” and an entire chapter on “hiring, stay employed, and firing,” amongst many other pieces of advice, #GIRLBOSS wasn’t what I expected. That is not necessarily a bad thing however. While I was expecting something different, Sophia Amoruso sold me on her story. Although it wasn’t as straight forward as “Never Eat Alone” was when it came to dishing out advice, Amoruso’s story is inspiring, and the attitude she conveys through her writing is great for giving someone a kick in the butt to get started on their own dreams.

I thoroughly enjoyed “#GIRLBOSS” by Sophia Amoruso. It was motivating and empowering, and really makes me excited to discover how I myself am going to embrace being a #GIRLBOSS, kicking butt on my way to success.

For More On “#GIRLBOSS” and Sophia Amoruso