Most Beautiful City Yet? Discovering Annecy 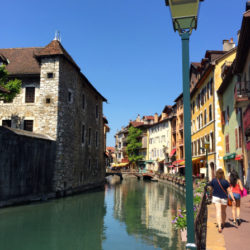 If someone had asked me last week what my favorite city in the world was, I probably wouldn’t have hesitated too long. While I’ve loved my time in Lyon, and all of the adventures to new locations, York, England was my favorite hands down. It had been ever my sophomore year of high school when I visited my aunt in England, and was reconfirmed when I went with my family again last summer. York is charming, filled with history, has a fascinating town, and my favorite location, The Shambles, even helped inspire Diagon Alley in Harry Potter.

But York just got some serious competition in the form of Annecy, France.

We arrived early in the morning, as we were just taking a day trip instead of an overnight, and we wanted to maximize our time. Annecy from Lyon is not too far away, only about a two hour train ride, which was convenient for us. Once we arrived we knew we wanted to see the main part of town, as we had heard all about the beauty of the canals and the homes in the canals. As we were trying to find the main center, we ended up exploring. There are tons of independent shops and exhibits that you can discover, so we made pitstops at anything we deemed interesting. My favorite was an art gallery we stumbled into. The artist was painting in the back, and his canvas was enormous, with seemingly every color of the rainbow sprawled out ready for him to use. His art was absolutely fantastic too, if it weren’t so expensive I would have loved to have been able to purchase some of his art. I believe the artist’s name is Pascal Hayot, but I am not certain that I am correct. His paintings are magnificent though, a collection of people, landscapes and still life. 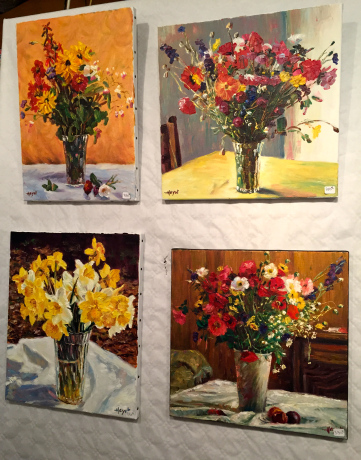 Dumbstruck Over The Canals

We were able to find the canals quicker than we thought, which we were pleased about. The city was breathtaking, even more so than I imagined it was going to be. The number of bridges, little alleyways that held amazing surprises, and canals were astonishing, and they themselves were works of art. I’m so lucky the weather was nice for us, although I can’t imagine even a storm being able to make Annecy look unappealing. The picture we had seen the most when looking up Annecy contained the canal splitting into two around a building, and it was absolutely amazing in person. 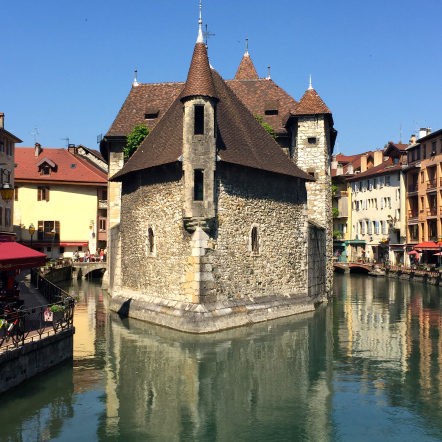 In addition to the amazing little city and the beautiful canals, there was a garden, a park, and a gigantic lake. I was unaware how large Annecy was, and while some friends who had traveled in the weekends prior mentioned a lake, I was unprepared for the size of it. In addition, the gardens and park were beautiful. Annecy overall is just a very well kept city. There are many trashcans to encourage cleanliness, and there were plants and flowers everywhere. As we were walking over bridges and along side the river we noticed that there were flower boxes every few yards, but even those were nothing compared to the scattering of flowers in the park. Everywhere you turned there was something new and beautiful, whether it was a rose garden, a little hedge maze, or a Greek-inspired statue. 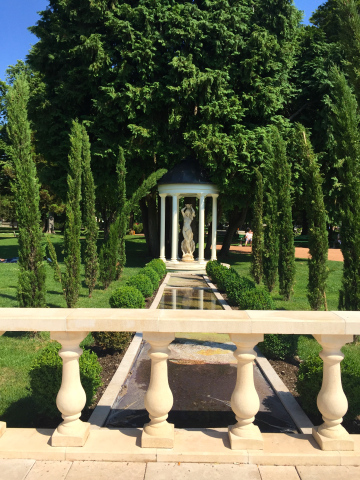 First on our list of activities was paddle boating. The three of us rented a little boat for a half an hour and started to explore the lake. It turns out paddle boating is much more strenuous then it looks. A lot more. But it was a ton of fun riding around in the lake, getting closer to the other side, and just floating when our legs hurt too much. It was nice just relaxing on the water, watching other boats go by. A swan even came close to us which was pretty cool (especially since it didn’t actually come up to us, those things are apparently vicious), and the water was cold so we could dip our hands and feet in. It was a wonderful way to start exploring the lake, even if it forced me to exercise more than I have since coming to France. 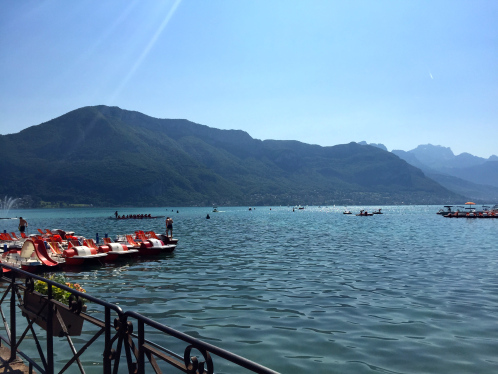 Through Nooks and Crannies

After our paddle boating, we decided to grab lunch before other afternoon activities. It was very hard picking a restaurant, as pretty much everything looked fantastic. We decided to walk a bit aways from the main part of town, and ended up finding a popular restaurant a bit away. It was great not only for the food, but also because it forced us to explore the town a bit more. We walked along the canals a bit more, but then kept going down little side roads and towards anything that looked interesting, whether it be a shop or a gallery. I enjoyed this potentially the most, as exploring and finding new things is what truly interests me when I’m in someplace new. 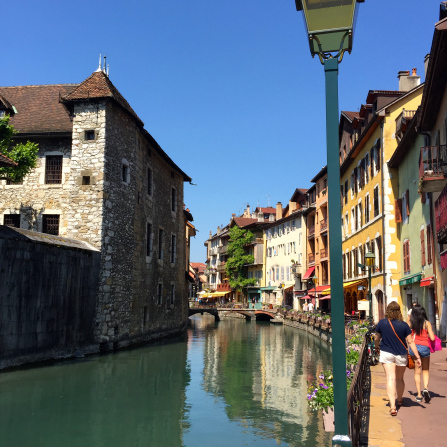 After lunch we bought tickets for a two hour boat cruise around the lake. It turns out the lake is absolutely gigantic, and it does take about two hours to get completely around it. Our guide was pointing out some interesting things to see as we went, but I unfortunately didn’t understand much because it was in French. The lake tour was nonetheless stunning. We were able to see little houses along the river, get closer to the mountains (which are even more impressive up close) and see places that must have been castles or forts. My personal favorite was that we could see people paragliding off the mountain. It must have been a popular thing to do, because there were groups of twenty all over the place. I’ve never done anything close to that, but I can only imagine how fantastic it would be, especially with the view of Annecy. 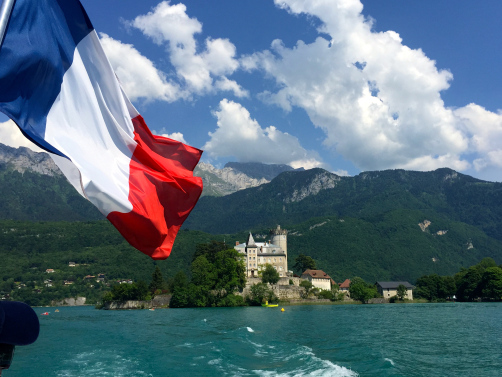 Because the boat was hot we decided to walk a bit down the lake towards the docks a bit more, and through the park. We were dying to cool off, and we picked the best way to do so. The park was very serene, with people lounging in the shade, and families having picnics. We were able to see another, more relaxed, side of Annecy as we walked down to a place by the lake to dip our feet in. The water was still so cold, and after being so hot (and definitely getting a bit sunburned) nothing felt better than just sitting in the shade cooling down. It was very relaxing, and a good way to start the end of our day. 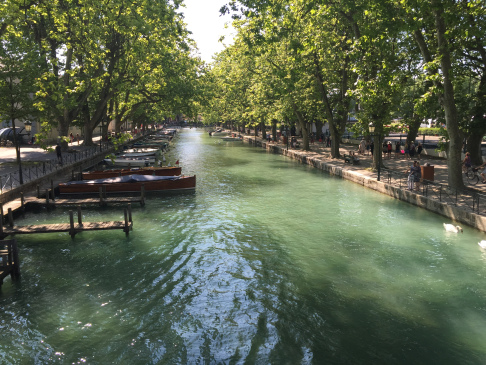 At The End of the Day

We had about an hour left before we had to head back for the train, so we decided to go into town once more. We found some gelato, which was absolutely delicious, and also found a nice place to sit where we could order some cold drinks to cool us down even more. I felt as though Annecy reminded me a lot of Italy, what with the independent shops and gelato everywhere, but I love Italy (as seen by my Rome trip) so it would make sense that I love Annecy then. Usually I’m a fan of the go-go-go approach to places, as I want to do and see everything in the limited time I have. Yet in Annecy we did the exact opposite, and I loved it. We didn’t necessarily do anything crazy, we just relaxed and did whatever looked interesting at the time, and overall just were. 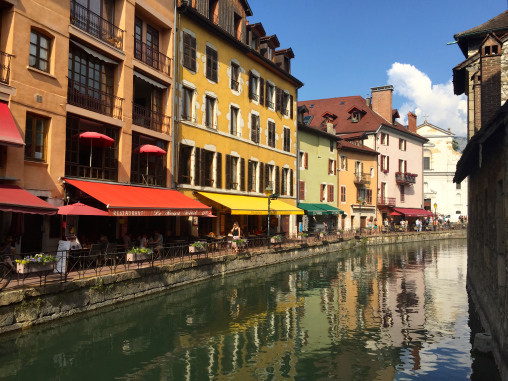 I was disappointed that we had to go back to Lyon after spending what felt like such a short time in Annecy. I usually fall right asleep on trains (and buses, and in cars, and even sometimes on the metro…) but for some reason I was wide awake on the trip back to Lyon. I was very glad too, as the train home took us through some amazing areas, with fantastic views. It was almost as though we had paid for a tour through the more nature-heavy parts of France, with small towns and farms peppered throughout. It was beautiful, and I’m glad even Annecy’s end came with something magnificent. 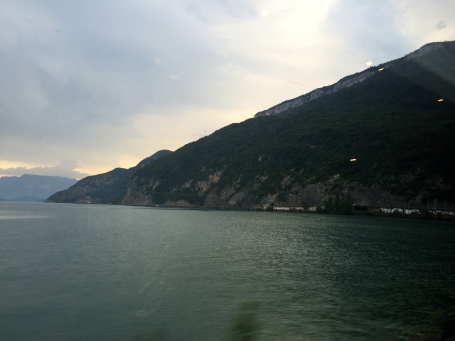