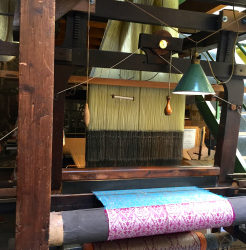 For our third company visit, we broke into three groups and took turns visiting Tisane de Soierie et Dervies (TSD), a silk company in Lyon. The capital of the European silk industry is Lyon, which made this tour extra interesting, as we were touring a company that helps maintain the reputation. TSD is a company that produces silk, not only for themselves to sell, but for high end companies like Hermes and Dior to sell as well.

We started off our tour with a lesson on the silk industry, something that I, as a history minor, loved. The silk industry started in China, where it maintained dominance for many centuries (and still holds the majority of production, as 60% of silk production is located in China). Silk was brought initially to France from Italy however. Lyon, being so close to Italy, was a ‘fair town,’ so business was popular, and trade was plentiful. By 1540, Lyon had the monopoly in the silk industry, mostly run by family businesses, who lived and worked in the same apartment.

Initially the silk was just plain, but it slowly developed into patterns, and the luxury component of silk developed as well. In 1801 a weaving machine was invented which helped improve the industry, and in 1831 a revolution occurred within the silk industry. The silk makers wanted to negotiate better payment, as they were not being compensated well for all their hard work, so 6,000 workers demonstrated, and a strike began. They were heard chanting “to live working or to die fighting.” In the 20th century, Lyon silk began working with high couture, and it developed into the silk industry that we know today. TSD is one of the silk factories in Lyon, one of the smaller, more traditional ones, as it is a family of weavers that continue to make high quality silk. Our tour guide’s grandfather was the one that started the business we toured. 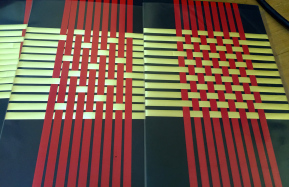 We were then shown the steps in silk production. There is a crossing technique used in the making of silk, with different crossings creating different effects and patterns in the silk. All the designs used to be drawn out, but they were now created pixel by pixel on a computer. However, the general steps are the same. A designer colors in each square, and can use multiple crossings in the same overall product to create different designs. Some are so intricate that portraits can be weaved in.

Next on our tour was seeing a machine from the 1850s. It had 4,800 threads of silk used, with the thread passing through a big needle. The men would be the ones working this machine in the past, as it takes physical exertion to work the machine. This particular machine can make about 15 meters of fabric a day. An issue with the machine however, is that if you make a mistake you will not know until you do more work on the fabric, as your mistake is unable to be seen initially. This is problematic because you then have to spend time unravelling the work you did after your mistake.

We were then allowed to see inside of the modern factory. Unfortunately we were unable to take pictures, as TSD was producing fabric for some more well known brands’ winter lines, which are still a secret to the public. The new machines we saw were very similar to the older ones, but they did not need manual work, and could produce much more product. Our tour guide showed us how it worked line by line, which was slow, but then she turned the machine on and we were able to see it work at full speed, which was extremely interesting as it moved much faster than I had expected, and made a loud noise that made me jump with surprise. The machine is smart too, as it stops when a thread breaks so it won’t mess up the product by working without some necessary materials.

Other machines were interesting in the factory as well. There was a warping machine that you wrap thread around, and then the thread is worked on in order to achieve the ‘10,000 thread’ necessary for some of the products. There is also a machine called a steamer that makes the scarves softer, which is good for the silk. A machine called a washer is also used, for the cotton and wool products made, but TSD sends their products out to a washer and has them sent back, as washers are costly and take up a large amount of space. The washer ages the fabric, which makes it softer. Also intersting was the process for checking over the finished scarves. Each one needed to be looked at individually, in order to assure that there were no defaults in the products they were sending out. It’s a time consuming process, and apparently only 100 scarves are able to be checked in one day.

Cutting is also done in the back of the factory. TSD hand cuts their own pieces, but some companies, like Hermes, prefer to do the cutting themselves, so TSD sends them the raw material for them to work on at their discretion. Apparently the price also changes depending on the company the scarves and silk are being sold to. For a company like Hermes, a big designer brand, the price can be up to four times more expensive, as the company likes to let individuals be able to afford their scarves, knowing that not everyone can afford the prices that bigger brands sell their items at. 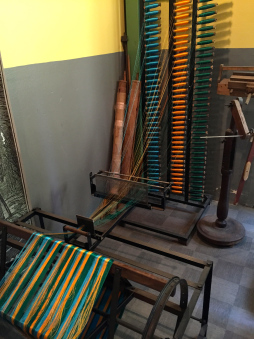 Another interesting tidbit is that not all the machines are working at the same time. There is no difference in the summer and winter machines, but each needs to be set up differently. Due to the high price of setting and resetting machines, TSD has found it more beneficial to just have multiple machines assigned for different seasons, rather than having each machine changed at a season’s end. These machines are not cheap though, with one being around 200,000 euros. The lifespan is long however, estimated at 40 years.

The company visit was interesting and fun. I preferred touring a smaller company, as I was able to get close and personal with all aspects of the factory, and was able to talk to someone who was highly invested in the business. I was also happy because my mom had said she wanted a silk scarf, so I was able to purchase her one from a company that supplies top designers located in the silk capital of Europe!