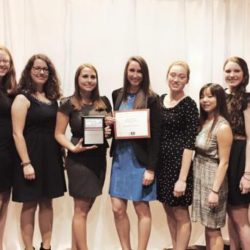 Last night was the last meeting of Northeastern University’s Marketing Association (NUMA) and I am so pleased I’m able to say I was in such an amazing club this year. At the beginning of the year I was a shy little freshman that accidentally crashed every executive board meeting held, and now I’m proud to say that I’m VP of Membership, ready to promote NUMA and get more people involved in the club. The club has been such an amazing part of my year for so many reasons, but there have definitely been stand out moments.

Probably the biggest even of the year is the American Marketing Association’s conference in New Orleans each spring. Here we as a club send a few members to go and compete in events. I was fortunate enough to be able to go with eight other members, and it has been one of the coolest experiences I’ve ever had. We competed in things like building a booth, a case competition, and other events based on our chapter plan. My favorite competition was the booth exhibit, as we had a Spiderman theme. The best part of it though was that we had a ‘find Spiderman’ competition, and I was the person dressed as Spiderman. It was so much more fun than I expected it to be, and I definitely gained some confidence running around the conference interacting with tons of people. Our chapter performed really well on top of everything too, winning a total of four awards, more then we have in the past. All in all it was a fantastic four days, and I hope to return next year! 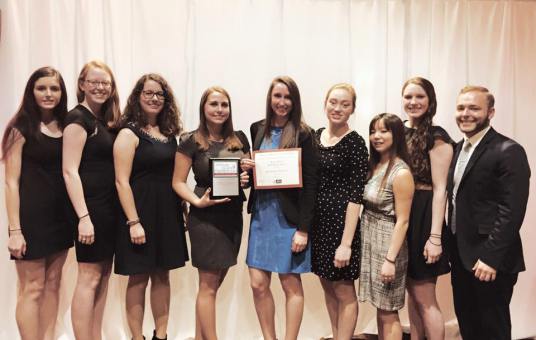 For the second half of the year I was Mentorship Chair, where I worked with the fabulous Fiona (VP of Membership, now headed to California to work for VMware where I will miss her a ton) to create a new program. We wanted to make membership rise from last semester and we figured that by making a mentorship program we could have more people feel connected and have a larger turnout. Overall it went pretty well. I hope next semester it can grow even more, but for a trial program it went well. I’m excited to have been able to help build a program that will hopefully grow over the years.

Something I have found very helpful about NUMA is that I’m the younger among older and wiser students. When it comes to classes I feel like I am so much better off because I have knowledgable friends in the club. My friends were able to help me when it came to picking classes, advising me on professors, editing my resume and preparing for study abroad. Thanks to my involvement in NUMA I also feel like I’m going to be more prepared for co-op, as the majority of those involved in the club are either on or have gone on marketing co-ops I myself will eventually being applying for. Being in NUMA makes me feel more prepared for the classes and jobs ahead. 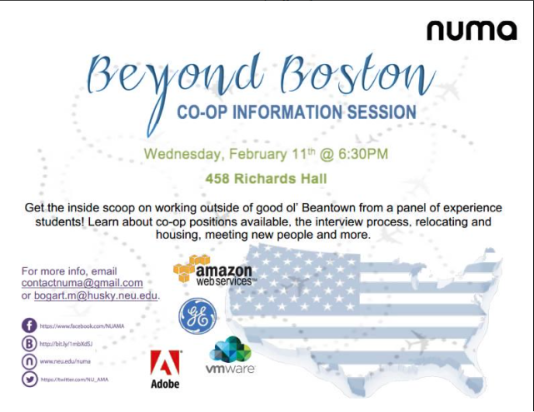 NUMA also manages to bring in some interesting speakers. Just last week we had HubSpot come in and talk about their unique ways of approaching their business, and we were able to participate in a fake case study for them. One of my favorites has been a co-op panel called ‘Beyond Boston,’ where students who have done co-ops out of state come and talk about them. I hadn’t been seriously considering doing an out of state co-op, but after listening to students talk about their experiences I would definitely be interested in looking into Amazon’s Seattle co-op, VMware’s California co-ops, or even an international one. Listening to speakers is part of the reason I find NUMA so interesting, as I am able to hear about all the different opportunities in marketing.

Even more valuable is the experience in marketing I am gaining from NUMA. Listening to speakers is a great way to hear about opportunities, but I also want to be able to build my skills so I’m a more attractive candidate for co-ops. Thankfully I am able to find that through NUMA. Two of my favorite activities were selling whoopie pies and participating in a vitaminwater case study. To raise money for our trip to New Orleans we had a fundraiser where we sold whoopie pies. I wanted to make sure I was considered to go to the conference, so I made an effort to sell as much as possible. To do this I grabbed one of my friends and went door to door in my dorm. We ended up selling three boxes worth of whoopie pies, something I was amazed by. I was excited that I was able to get more experience when I might be interested in pursuing sales as a career. Equally as fun was the long term case study our chapter participated in. We were given a brand (vitaminwater) and were told to find a way to improve their sales. While we did not place at the AMA’s conference, I think that for our first year we did pretty well, designing a reboot of their energy drink line.

The best part overall regardless of everything has got to be the people I have met. I have been able to hang out with some wonderful people who I am convinced I will be friends with for years to come. Everyone has been so nice, and willing to go out of their way to help me out. From dinners with Fiona, Kayla and Josh, to lunches with Margie, midnight snack trips with Emily and the St. Patrick’s Parade with Ashley, the people I’ve met through NUMA have been so inclusive and have become some of my closest friends.

So while I will miss not having NUMA over these next few months, I am excited for what is ahead for me and the club next year!