6 Things To Know Before Visiting Poland 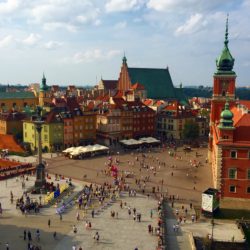 Heading to a new country, especially one with a unique culture, can be challenging. There are many ways cultures can be different, and at times it can feel like you have no idea what you are walking into. Here are some things that surprised me when visiting Poland.

Something I had never considered before traveling were holidays occurring in the country during my visit. A large celebration took place during my time in Poland: World Youth Day. World Youth Day is an event organized by the Catholic Church every few years held in alternating cities. This year it was in Krakow. I had visited Krakow a couple of days prior to the official dates of World Youth Day, and was in Warsaw during the event. But because so many people had come to Poland to celebrate, Warsaw was absolutely packed. While I was able to revisit Warsaw when it was less crowded (which I enjoyed it much more), I will definitely make sure to check when holidays that bring approximately 3 million to the country are occurring.

On August 1 Poland stands still for a minute to remember the 200,000 that died in the Warsaw Uprising. This was a travel day for my study abroad group so unfortunately I was unable to witness what I would imagine to be a tremendously moving moment in Poland, and I hope that some point in the future I am able to experience it.

The Jewish Relationship with Poland

A difficult part of my trip to reconcile with was the racism against Jewish citizens in Polish history, and in present day. I had never considered Poles to be perpetrators of violence in World War II – I had always assumed it was the Germans or Soviets who were the aggressors. But when reading documents about the relationship, as well as seeing it displayed in museums, it’s an unfortunate reality that at times during World War II the Poles acted on their racism towards Jews. What is even more disheartening is that there is still racism today. During my five-week trip there were multiple comments said on tours and at our hotels that were anti-Semitic, and when visiting Jewish cemeteries it was clear to see how much better maintained the Catholic cemeteries were.

It’s also surprising how few Jewish citizens are in Poland. In the entire country there are only about 7,000 practicing Jews. In Warsaw alone, there are only 500. These numbers shocked me, especially when realizing that there were more kids in my high school than there are practicing Jews in the capital city of Poland. I feel as though this really speaks to the horrors Jews faced during the war – approximately 97% of the Polish Jews were exterminated during World War II, leaving so few survivors behind, to the point that even today the community is only a shadow of what it used to be.

Poland is a very Catholic country. So much so that 93% of the population is Catholic. Because of this, one figure in particular is idolized in Poland: Pope John Paul II. Born in Poland, Pope John Paul II ended up moving to Krakow as a young man where he began studying to become a priest at an underground university during the war. When he was elected to the papacy in 1978 he became the first non-Italian pope in 455 years. Pope John Paul II is a national hero in Poland, thanks in part to his strong ties to Catholicism, but also because of what his influence resulted in. One instance that is especially important to note is his influence in Solidarity. In 1979 when he gave a speech in Poland, he inspired labor workers to unite and essentially helped start the movement. In later trips he continued to give his support.

A hard idea to wrap your head around is that while there is a lot of history and buildings were built hundreds of years ago, in some cities the majority of the architecture needed to be rebuilt. During World War II when the Nazis took control, they destroyed much of Poland. Some cities, like Warsaw, had about 85% of the city destroyed, having to be completely rebuilt from the rubble. Looking around the city however, you would not be able to tell. Warsaw in particular is a completely rebuilt city, now the ninth most populous city throughout the entire European Union.

I have never traveled to a country where the exchange rate was in my favor. The only times I’ve been outside of the country were to European countries on the euro or pound, so everything was slightly more expensive. This is not the case with Poland. The Polish currency, zloty, is worth approximately 1/4 of the dollar, so for every dollar you get four zlotys in return. Not only that, but prices are similar, meaning you get much more with your money. For instance a postcard in Poland costs about one zloty, approximately 25 cents, while in the United States a postcard is about 50 cents, maybe more. After visiting a country where my money stretches so much I’m excited to explore other countries where I can more easily afford to explore the city.